Contrary to all the available evidence on this blog I have been working on something other than baby blankets recently: 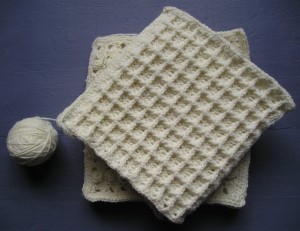 They are squares of Uist wool in two different textured stitches, and my intention is to make them up into a cushion to replace one of these: 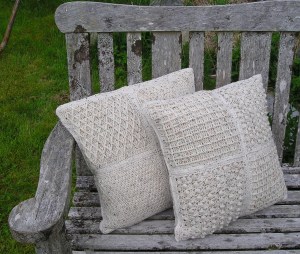 This bit requires rather a lot of counting of stitches, which explains why I have paused for a while. I am posting them on the blog as a little jolt to my conscience to get on and finish them!

It seems a long time ago now, but some of you might remember my Candy Crush baby blanket (here). Well I had some ends of yarn left over and managed to make some teeny tiny squares from them: 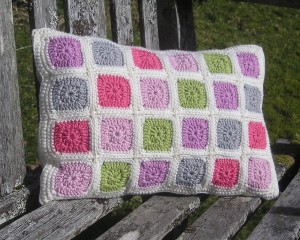 And there was just enough to put them together to make a cushion. I am quite pleased with it actually.

You might remember my first Uist wool cushion cover here
Well a recent trip to Uist saw me returning with enough yarn for another cushion, so now there are two! 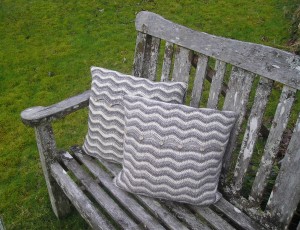 They are not quite identical (who knew there was more than one way of sewing a strip of ripple stitch up?) but they are entirely in keeping with each other, and I am pleased with them both.
And just in-case you can’t pop over to Uist yourself they are now selling their lovely wool on-line (here)

Thanks to Orla Kiely For the colour inspiration for this cushion cover. See here 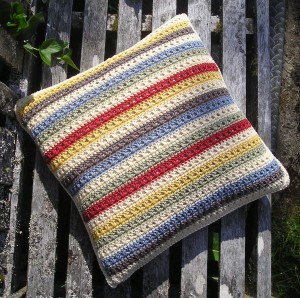 The yarn is Drops muskat in vanilla yellow, sky blue, light yellow, rust, khaki and medium grey, and the whole thing was made in crossed trebles on a 5mm hook. This time I did remember to incorporate an opening, and there are some cute red buttons to finish it off:

This project has been on the back burner for a little while, but I feel I have some mental space for it now I have finished the ‘perseverance’ cardigan.
It is based in Little Woollie’s ‘Wheels within wheels’ blanket here, which itself was based on a Ravelry pattern by Frankie Brown here. I knew that Lucie from ‘Love Lucie’ had also made a cushion using the same pattern here. I admired this plainer look, which I felt used the pattern to show off the texture of the yarn, and I wanted to create something similar that might work as a cushion cover. After some considerable trial and error I came up with this:

I have to thank Lucie for the tip of taking the thread to the back of the work each time I started a new circle, and in return can I pass on my own tip?
The piece in the photo is completely unblocked (although you will see from several blogs that people have had problems getting flat squares) and the secret for getting the circles to sit flat in the squares is quite a neat one….
I didn’t do the last round of raised stitching on the final circle, and instead I only picked up the bottom loop of the stitch when I turned the circle into a square, leaving two loops on the top to make the final wheel. The result is not hugely different from the proper raised wheel, and certainly sits better in its square than the raised one. 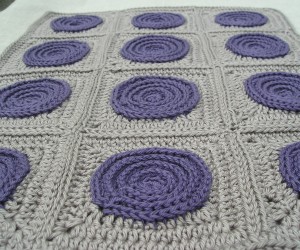 It is made in Cascade ultra pima fine cotton 4 ply in heathered pansy and taupe, on a 4mm hook. It is a lovely yarn, and one that I would like to work with again. First though I need to get my sewing machine out to make the cushion.